The Lammys and other goings-on 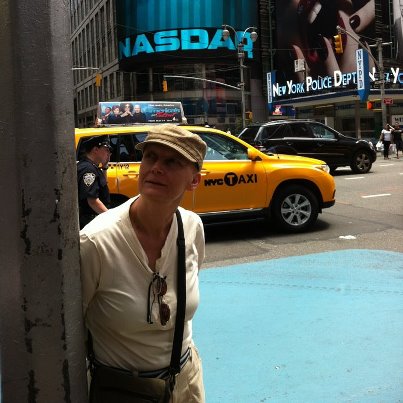 Linda and I attended the Lambda Literary Awards on June 4 in New York City. I was a finalist in the lesbian erotica category for the book I wrote under a pen name. Getting on the short list for a Lammy is truly an honor, so I wasn't too disappointed when my name wasn't called. We had so much fun that weekend, exploring the city, visiting with our friends Nell Stark and Trinity Tam and then spending quality time with our beloved Joan Larkin. The award ceremony itself was worth the trip. Very upscale, with celebrity presenters, expert and hilarious emceeing by Kate Clinton, and a great performance by Lypsinka. It was gay, gay, gay.
When we returned to Chicago I started in on a week of appearances for my recently released book, Runaway. I had fun visiting with the lesbian book club at Outwords Books in Milwaukee. Runaway was their book of the month - how cool is that? The next night I did a solo appearance at the main branch of the Chicago Public Library. I was terrified that no one would show up, but the library did a good job of publicizing the event and there was a decent crowd. We had a great discussion after the meeting. I answered questions I'd not gotten before. It was a lot of fun.
At the weekend I drove up to University of Wisconsin-Waukeshau to participate in the SE Wisconsin Book Festival being held there. I was on a panel on the short story in the morning. The room was packed and the discussion lively among the panelists and the engaged audience members. Danielle Sosin, a novelist and short story writer was also on the panel. She reminded me of someone and I reminded her of someone, so that was all probably meant to be. 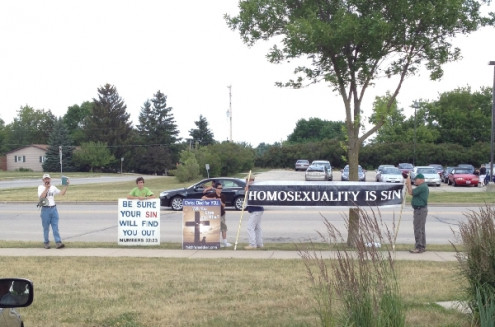 In the afternoon I was a member of a panel on LGBT literature, the only gay event in two days of panels on books and writing. Immediately after the panel I stepped outside the building for some fresh air and came upon the first anti-gay protest I've ever seen. I live in the north side of Chicago and am terribly spoiled. I get to be as queer as can be and it doesn't raise an eyebrow. So running into the megaphone and poster weilding zealots parked out in front of the University felt like seeing an exotic animal. You know they exist - you just don't expect to run into one. Apprently they'd gotten wind of our little panel and flew into action. It was a pretty lame protest - just seven die hards.
So I got a full week to think of myself as a writer and forget about myself as a cancer patient. Then on Thursday, June 21, I had surgery and I was thrown right back into the game. I had a lumpectomy, a lymph node biopsy, and while they were in there, they removed my chemo port. Three incisions, but not major surgery. Still, I underestimated how crappy the anesthesia makes you feel. I'm okay now, but the first few days were unpleasant. The pathology report came back with great news - no lymph node involvement, clear margins, and just a 3mm bit of cancer left, which of course was removed. Now we move on to radiation - five days a week for six weeks. Honestly, that sounds like a sentence rather than treatment. "You've been sentenced to six weeks of daily radiation. May God have mercy on your soul."
Nothing further to report now. I'm starting to noodle around with ideas for a new book, but nothing feels solid yet. It will be so good to start in on a new project. Thank you to everyone out there who have been so supportive to both Linda and me. If anything good can come out of a cancer diagnosis, it's learning how loved I am. The gratitude I have for that immense.
Categories: uncategorized
« back to all blogs