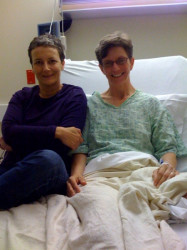 The day wore on, and Linda was feeling worse and worse. We kept calling people to see what they thought, but what we should have asked ourselves is "What the hell are you waiting for?" By now she has a fever of 102 and a sharp stabbing pain below her right shoulder blade. We called more people, the idea of the crowded emergency room apparently crowding out any remaining lick of sense in our brains. And I didn't even have a fever to use as an excuse for my muddy thinking.

It reminded me, later, of an alcoholic wondering if he's an alcoholic. It's a pretty safe bet that if the question keeps coming to mind, well, then you're an alcoholic. We needed to be in the hands of medical professionals, and we were in deep denial.

Late in the evening Linda got up to go to the bathroom and I saw her start to wobble. I couldn't get to her in time and she collapsed, crashing into the bedroom wall. It scared the hell out of me, and it also made the decision for me. I called 911 and the ambulance was on its way. This set up the next challenge, which was to get the paramedics to our door. We live on the river, in a townhouse complex, and though we have a street address, there is no street in front of our house. No one can find it, including the paramedics, so while Linda lay immobile in our bedroom, I was running around trying to direct the traffic. The two firetrucks and an ambulance seemed a little much, but we were finally ready for help. Bring it on.

One of the firefighters asked me what the story was. I told him Linda had fainted and that she had flu-like symptoms. He wouldn't let more than himself and one other guy up to check things out, no doubt anticipating a virulent case of swine flu with Linda foaming at the mouth. Her blood pressure was taken, and then taken again, and suddenly the activity stepped up. They might have told me what her blood pressure was, but it didn't sink in. They got a line started on her and whisked her away to Swedish Covenant Hospital, but I still managed to beat them to the ER.

The next few hours were when it started to sink in that Linda was seriously ill. Her blood pressure was hovering in the 50/something range (I never remember the bottom number), and when someone explained that normally you'd see that top number around 110-120 I realized she was in trouble. Plus, she was crying out in pain, but they couldn't give her anything because of the low blood pressure. It would kill her.

As I started to get more worried I asked the resident whether this could lead to a sepsis. "Oh, she's septic," the resident said. My idea of sepsis was a roaring, unstoppable infections pervading the body, but she assured me it's not always unstoppable. But it does shut down the organs, and the low blood pressure was a by-product of this. Also, her kidneys weren't working. Great.

Around two in the morning her blood pressure had risen into the 70s and they gave her something for pain. They were able to stabilize her enough to move her to the IMCU at about 4 in the morning. We later found out that if we had been much later - an hour or two - in getting her to the hospital, she probably wouldn't have made it. Her physicians, a whole team of them, gave the diagnosis of Severe Progressing Necrotizing Pneumonia, also referred to by them as a "devastating" pneumonia. In other words, we're lucky she's alive.

How can these things happen? And how could we have been so in denial about what was going on in her body that day? I simply don't know. I do know that we'll probably be driving each other to the emergency room everytime we have a sharp pain, a bad headache, or a bad head cold. The better safe than sorry adage is now gospel in our house.

Wow. What a story. I think we can be sure you're a writer.

I agree with Carrie. If you know someone well and they're normally healthy why on Earth would you think anything would progress this way? After all, most of us have been sick with a bad cold or flu and gotten over it.

Clearly, without you she wouldn't have made it. So, really, this is about how your relationship saved Linda.

It's true that waiting was simply a human and understandable 'mistake,' that anyone could have made. I've heard plenty of stories of the same, but with worse results than we had. It's hard not to second guess when you learn how high the cost of waiting could have been. But the thing I most wanted to say, and didn't adequately, is how grateful I am that Linda's still here with me.