I can do nothing but admit that I'm woeful when it comes to keeping my blog updated. Lots has been happening, so let me bring you up to speed.

In March I had the pleasure of traveling to Palm Springs to meet up with my new publisher, Bold Strokes Books (in the form of Len Barot, aka, Radclyffe), her editorial staff, and quite a few of the BSB authors. We gathered for a day or two of workshops and meetings and it was fantastic fun to meet everyone, learn a lot at the exceptional workshops, and hang-out pool side talking shop and enjoying the sublime weather. There were many spirited conversations on the weighty issues of the day, one of which involved the varying definitions of what constitutes having sex. My opinion is that you know it when you feel it, but others had much more specific qualifications. Bill Clinton would have approved. 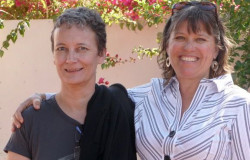 The gathering was then opened up to readers for a book festival, and it was wonderful to meet so many women who love reading as much as I do. A few recognized me from my previous novel, Sometimes Quickly, and that was a thrill.

The BSB authors were friendly, the company organized and professional, the woman at the helm a real leader. It feels very good indeed to be associated with a steady publisher in this rocky time in the industry. I have great hope that Veritas, now schedule for publication in November, 2009, will be a success.

On March 21st I read from Veritas at Women and Children First Bookstore, along with four other BSB authors - Nell Stark, Cathy Rowlands, Jennifer Harris, and Rachel Spangler. The evening was a blast, perhaps especially due to the enthusiasm of some dedicated BSB readers in the audience. Carleen Spry filmed the entire reading and Watty Boss took many good photographs. Thanks to you both for recording the night for posterity.

I learned a week or so ago that I have been accepted by the Ragdale Foundation for a writing residency at their art colony in Lake Forest, IL. I'll be attending in November of this year, spending a month working on my next book for BSB, tentatively titled Shadow in the Dark. The plan is that I'll have so much of the book written by November 1st that I'll be able to finish it while I'm at Ragdale and do my first edits. Lately I've found many of my writing plans frustratingly delayed by the demands of my real estate practice - a line of work that is so erratic and unstructured that it is hard to get into good writing habits. That sounds like a bit of an excuse, doesn't it? Well, I'll just have to find a way. After all, T.S. Elliot worked in a boring bank all day and managed to write every night. My excuse is a weak one.

Upcoming for me is the Saints and Sinners Literary Festival, where I'll once again meet up with my BSB compatriots as well as many other writers I've met at these events around the country. I'll be reading from Veritas and taking some really great Master classes and workshops. This will be my second time at S&S, and since it's in New Orleans every year, it won't be my last.

What master classes are you taking at SAS?

Awesome site!
Way to go, gal.
I was honored to see my picture.
Cliffi

Hello.
Check this link.http://forums.afterdawn.com/t.cfm/f-125/...reezing-855315/Also, after ripping the DVD, use FixVTS to cleanup the rip.Use DVD Shrink as usual to fit the files to the disk.

Greetings, altogether your great parents around!
My group is a comrade of Gerry, who brought my person to this place also i am Leroy Sawyer.
I live within San Marino, which can be found in the area of Italy and my job is Electrician. Well, allow us to pick up to this point and not wasting one and all's time.
I enjoy to tell you friends something concerning my perfect previous party! Oh chap, a festivity guy, you might judge at this instant. Of course, I am! Are not we all? Right, I understand, maybe yes possibly no, as soon as the thing comes down on the road to the thing, quality counts! Everyone like to travel to the genuine enjoyable party, however to present a great celebration appears to be nearly unattainable, in case you won't give birth to a genuine plan! Besides a fine association to the right associates like Water Slides ny appears to be critical. Currently nobody desires to spend time and merely drinking a beer any longer! A bit must take place. One fine first-rate amusement is vital! It could lead to far, to clarify every part of this possibilities at this time and at this time. Get a little information and your upcoming hang loose can simply be terrific!

Get unbeatable pricing on building insurance. Our agents are devoted to obtaining the best building insurance quotes. Our bureau offers the agent to client relationship. We understands your needs are important. As your agents, we will strive to achieve the importance of your specialized business needs.

Amazing. Love this nice thought. Please also check out the last user products and services reviews, including the most requested villa bali review.

great blog as always, love it everytime i come to this site.
http://dotapoker.com

great blog as always, love it everytime i come to this site.
http://dotapoker.com

Hello, i am monica . I was working at betting online company in cambodia. if u interesting about Agen Bola Terpercaya (casino online) please visit my site. Thank You Very Much

The web is full of different websites where you can freely gamble all you want, but not all of them also allow you to bet bitcion. When it comes to bitcoin betting there are only a few sites where you can do it and http://4grinz.com/ is one of them.

Thank you Information that you convey is very useful, waiting for the next update friend, Greetings Success :)
sanadomino

very interesting article I really like this article thanks.
togel singapore