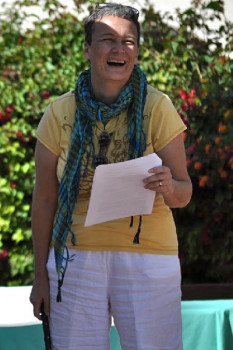 It's been another long spell since I've written anything here. No excuses. I think it's an out of sight, out of mind thing. Facebook, on the other hand, seems to be within my sight entirely too much, but please look me up there and become a friend. You'll get updates about my writing, albeit infrequently, and probably more than you want to know about my personal life.

Since I last visited here, my own website, I've been keeping busy. Here's some of the news:

I'm now under contract for my next mystery/suspense novel, tentatively called "Runaway." I'll be turning the manuscript in in a couple of months, with publication sometime mid next year. I'm very excited about it, of course, and feel that it's a much different book than my previous two mysteries. More news on Runaway as publication nears.

I did stick my neck out and read from that new book at the annual Bold Strokes Books Book Festival in Palm Springs in early March. As usual, the festival was huge amounts of fun. Lots of readers came to hear the many BSB authors who love making the trip to the desert every year. What can be better than hanging out with the people who write the books and the people who love reading them. Heaven. The weather's pretty astonishing too. After three months of Chicago winter, I'm half blinded my first few days in California. The photo you see of me here is during the BSB skit, when we hapless authors mug our way through a script skillfully put together by Nell Stark. As usual, it was uproarious.

My long time love affair with lesbian literature, particularly mysteries, has led me to write a feature article for AfterEllen.com about how the genre has changed over the years. I hope that this will become an ongoing column that will feature new books and perhaps some interviews with writers in the field. It was a blast to write and should be appearing on AfterEllen soon.

And this week I head out to Cornell College to speak to a class on LGBT literature. Cornell runs a unique one class at a time curriculum, so these lucky students have spent the entire month of April immersed in some of the great books and films about the LGBT experience. I'm looking forward to sharing what I know about the current scene, particularly in the popular genres that, of course, are usually overlooked in an academic setting.

I have to put my nose down and get through the rest of Runaway, but as soon as a strong draft is complete, I'll post the first chapter here on the site. Ta Ta till then.
Categories: uncategorized
« back to all blogs