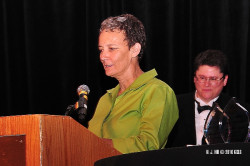 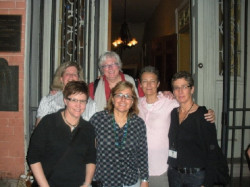 I believe that I've fallen into delusional thinking about my presence on the internet. If I look at Facebook and post on Facebook, then I'm as connected as I need to be. But the fact is, there are still more people than not who aren't Facebook users. I'm not so delusional that I think there are that many people who want or need to know what I'm up to, but I should still keep these things current. Mea culpa.

Since I last wrote I've been busy doing a number of readings for Veritas. Oh, yes, and I also won an award. The photo of me at the microphone was taken as I accepted a Goldie award for Lesbian Mystery at the Golden Crown Literary Society's convention in Orlando this past June. I was so stunned when they called my name that Linda almost had to nudge me. Luckily, I had enough presence of mind to kiss her, make my way to the stage without tripping, and fumble my way through a short acceptance speech. That was a thrill.

I also attended the Saints and Sinners Literary Festival in New Orleans, which is always a great time. There are some top notch writers at this event and it's a great opportunity to have fun and learn from fellow writers. Unlike the GCLS and BSB events, Saints&Sinners is more author oriented. Sort of an industry convention. My friend Lucy Bledsoe was there and I enjoyed her master class on building character. She was inducted into the Hall of Fame on the last day of the festival. Many of my BSB fellow authors were also there, and our head honcho, Radclyffe, was as well.

My story, Thirty Days Has September, was accepted for publication in Off The Rocks 14, an anthology put out by New Town Writers, a venerable Chicago gay and lesbian writing group. I read from the story at the huge Printers Row Book Fair in downtown Chicago, which was really fun. I realize that most of my appearances have been at LGBTQ venues, so anytime I touchdown in a mainstream spot I feel a little out of my comfort zone and a little like I'm stretching in a good way. It's not as if what I write would only be of interest to those who play on my own team:-) I think every writer would like their work to reach as many people as possible. My other thought on the matter is that I've been reading "straight" fiction my whole life. I'm performing a public service by letting straight readers know of a whole treasure trove of fiction they are not regularly made aware of.

I've been accepted into the Vermont Studio Center for the Arts for a four-week residency beginning September 26. I'm excited beyond belief about this. I love residencies and find that I'm absolutely at my most productive during them. Plus, this is Vermont in October! I'm preparing to be blinded by the fall color.

Over the summer I wrote a short erotica novel under a pen name. That's all I can say about it, but I wanted you all to know I haven't just been riding around on my scooter, pretending I'm not a writer or a real estate agent. I've written some, and I've sold some.

Coming up - resumption of work on novel #3, a romantic thriller set in Chicago and the back woods of Idaho. I hope to largely finish that by the end of my time in Vermont and have it published by late 2011.

If you are visiting this page and aren't a Facebook friend, please click here and send me a request. I'd love to make your acquaintance. And as always, if there's anything you'd like to ask or discuss, just let me know. I always love to hear from you.